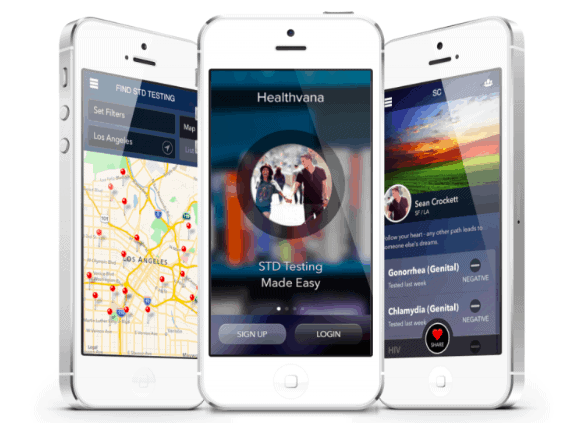 Young people under the age of 25 suffer from HIV and other sexually transmitted diseases at higher than normal rates, in part due to inadequate sex education, persistent stigma and other barriers to getting tested. Fortunately, there’s an app for that.

Healthvana is a patient engagement platform that locates nearby STD testing facilities and delivers test results to patients via a smartphone app. Since its launch in 2010, the Los Angeles-based company has delivered the results of over 200,000 HIV and STD tests to patients at participating healthcare providers across the country.

Apps like Healthvana are an important tool for connecting young people to sexual health education, testing and treatment. According to the CDC, about ten thousand young people are diagnosed with HIV in 2014, while youth also account for nearly half of the 20 million new STD cases each year.

Despite these high rates, almost half of youth ages 18 to 24 years living with HIV do not know they have it, and only 22 percent of sexually active high school students have been tested for HIV. The percentage of US schools that require education about HIV prevention is declining, down from 64% in 2000 to 41% in 2014, according to CDC’s 2014 School Health Profiles.

Healthvana works by integrating with testing facilities so that patients can opt to have negative lab results delivered through the Healvana smartphone app as soon as they are ready. Of the nearly 10,000 AIDS Healthcare Foundation patients that received their test results through Healthvana in 2015, 70 percent accessed their records within four hours of the results being available. The app provides next steps for treatment, and can also be used by people being tested for a variety of STDs, including chlamydia, gonorrhea and syphilis.

“Healthvana empowers you to make better healthcare decisions,” CEO Ramin Bastani told NPR. Bastani hopes that partners will use the app to share their results with each other before sex, pointing out that Healthvana acts as a verified STD negative or positive status that is in your pocket wherever you go.

Healthvana isn’t the only app that connect young people to HIV testing. The Department of Health and Human Services offers a similar locator app pointing to nearby test centers and other resources, and other apps locate free condoms or provide mobile game designed to sensitize youth to the risks of teenage pregnancy.
According to Dr. Karen Rayne, a sexuality educator and author of the book “Breaking the Hush Factor: Ten Rules for Talking With Teenagers about Sex,” the privacy of a mobile app is a great way to “draw teens out” and “give them the confidence to access a public physical space” like an HIV testing clinic. Ideally, apps like Healthvana facilitate an important first step toward connecting youth to testing and services, helping get more young people the medical care they need.

Post Views: 2,147
Tags: Population Health, There's An App For That
Comments are closed.