How to use voice commands for medical dictation 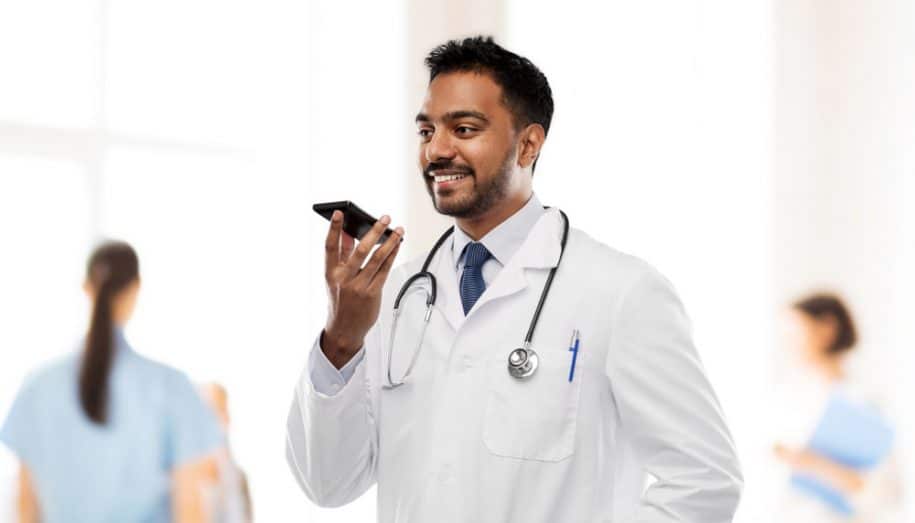 To maximize the potential of modern voice recognition software, physicians need to invest at least some time in optimizing their dictation workflow. While this requires some extra energy up front, it is well worth the effort. After you’ve learned the basics of your speech-to-text software, you should learn some useful voice commands for medical dictation.

When you dictate using Mobius Conveyor, you can use voice commands for navigation, selection, correction, spacing, capitalization, punctuation, lists, and convenience. All voice commands are available any time you’re dictating text.

Voice commands are automatically enabled in Mobius Conveyor. All you have to do to use a voice command is speak the command while dictating.

To begin dictating, make sure Conveyor is connected and press the microphone icon available anywhere in the app.

There are a few easy but important voice commands that will save you time if you dictate regularly. Open Conveyor and try the following commands as you learn them.

Here are five basic voice commands to start with:

Mastering the following commands will make dictating with Conveyor a truly hands-free experience.

The simplest navigation commands are “Go to End” and “Go to Beginning,” which will take you to the end or beginning of the current text field. You can also say “Next Field” or “Press Tab Key.”

You can use voice commands to tell Conveyor to select almost anything. As a simple rule of thumb, just say “Select” followed by whatever part of the text you want to select.

To deselect selected text, say “Deselect That” or “Deselect All.” With practice, using voice commands for selection will be a huge time saver.

We all make mistakes. Mastering the following commands will save you editing time.

You can also say “Delete That” to delete selected text or just “Delete” to backspace one character if no text is selected.

How to learn new voice commands

There are two places in Mobius Conveyor where you can see a full list of supported voice commands.

From the Live screen, swipe left until you see “Commands.” Scroll down and try the commands you see, or press and hold a command to view details.

You can also find a full list of voice commands in Settings –> Speech Tools –> Commands Reference.

Conveyor is compliant with all HIPAA regulations and can be set up by any provider in minutes. You won’t even need to involve your IT department because the software operates entirely outside your EHR. Like a simple keyboard or mouse, Conveyor is a peripheral device that inputs data without involving other system software.

If you don’t already have a Mobius account, learn why providers love Conveyor or try it yourself for free.