Typing vs. Dictation – Which is faster? 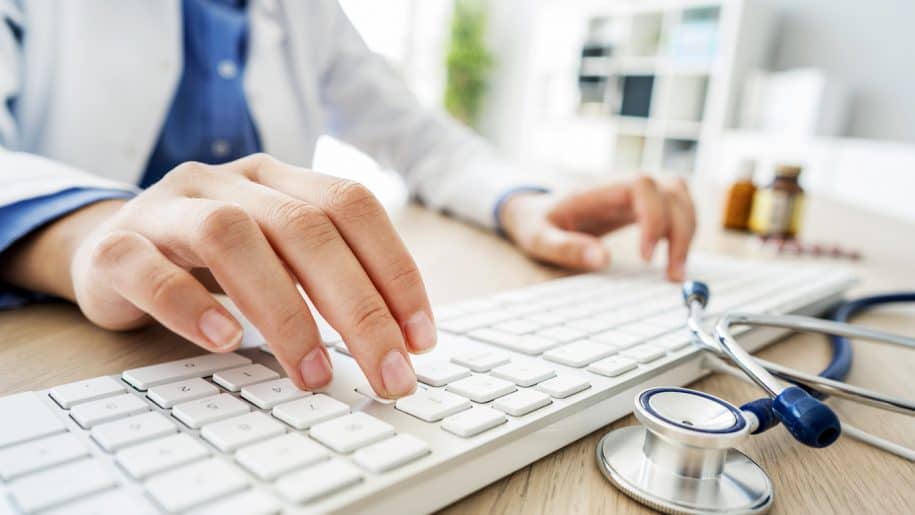 Since moving to electronic medical records, doctors spend hours each day typing clinical notes. For many providers, the charting demands of EMRs have been a cause of burnout. Some physicians have responded by turning to medical dictation software and other workflow solutions that reduce the need to type. When considering typing vs. dictation, the obvious question is, “Which is faster?”

Whether you type or dictate patient notes, it is ultimately a matter of minutes. There are 24 hours in a day, and the average primary care physician spends 1.5 of those finishing paperwork after clinical hours. Doctors interested in a healthy work-life balance need to use their EMR as efficiently and accurately as possible.

So which is faster – typing or dictation? Just as importantly, which is more accurate? Here is a summary of the numbers based on existing research and estimates.

Comparing speeds of dictation vs. typing

Increasingly, doctors are moving to automated speech-to-text for medical dictation, which instantly transcribes spoken words using speech-recognition software. Using an app on their smartphone or computer, doctors can dictate into free-text fields of the EMR and edit the transcription before saving.

In both cases, dictation is faster than typing.

Speech recognition software can transcribe over 150 words per minute (WPM), while the average doctor types around 30 WPM. Professional transcriptionists type around 50-80 WPM, which is also much faster than physicians.

We did the math using conservative estimates and found this:

“The average U.S. physician could reduce documentation time by about seven hours per week by switching from typing to dictation.”

The bottom line is that you speak much faster than you type. As with typing, getting a dictation perfect the first time requires speaking skills that you develop over time. However, a small amount of effort to refine a new dictation workflow can eliminate days of typing over the course of a year.

Short answer: It depends on your workflow, but dictation can be as accurate as a carefully typed clinical note.

Long answer: Every physician makes it a priority to write accurate clinical notes. While doctors who dictate increasingly opt for fully-automated speech-to-text workflow, this isn’t universal. Some providers still send dictations to a third-party service where a professional transcriptionist edits and reviews their dictations.

Unfortunately, researchers have found high average error rates using this type of off-site medical transcription. This may be because it took physicians in the study an average of four days to review and sign a dictated clinical document that they sent away for transcription. The lag time created by third-party transcription services makes room for errors that are often clinically significant.

Using the latest speech recognition software for instant dictation, physicians can ensure a clinical note that is 100 percent accurate, just as it would be with careful typing.