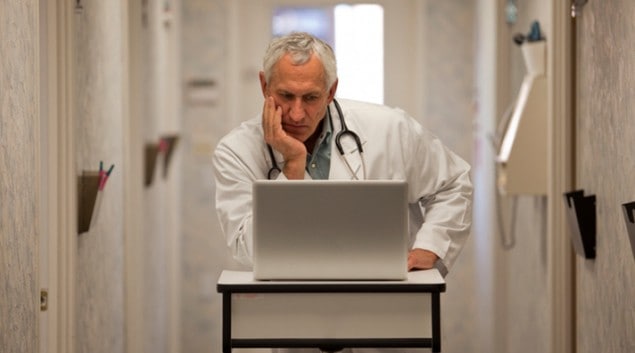 There’s a common belief that EHRs are a major factor contributing to physician burnout. But what does the research say? A 2020 study finds a significant connection, and that there’s something we can do about it.

In July 2020, a group of Canadian researchers published an article based on survey data from an academic hospital in Toronto. Their primary question was simple:

“What’s the influence of EHRs on physician burnout?”

More specifically, the authors wanted to measure the extent of burnout and how physicians perceived the EHRs contribution.

They sent a survey to over 400 physicians, residents, and fellows and got 208 responses. They also reviewed back-end EHR use data for the survey respondents.

Here are three top-level findings from the article, which was published last year in the Journal of Medical Internet Research.

When asked if the EHR contributes to burnout, two-thirds of respondents said “Always” or “Almost always.” In short, physicians, residents, and fellows believe EHRs are decreasing work satisfaction and well-being for themselves and their colleagues.

This is the researchers’ primary and clear conclusion:

2. Physicians who are dissatisfied with their EHR are more likely to be burned out

In addition to self-reporting burnout, survey respondents answered questions about their experience with the EHR. Those who reported higher frustration and lower satisfaction with the EHR were significantly more burned out.

Conversely, respondents with high EHR satisfaction were less likely to be burned out.

Satisfied physicians reported using “workarounds” to complete EHR tasks like typing clinical notes into a word document and pasting them into the EHR. Others talked about using EHR customizations like personal shortcuts or time-saving tools like voice recognition software.

The survey asked physicians and residents to self-report time spent using the EHR, but researchers also collected log data directly from the software. This allowed researchers to compare self-reported time with objective numbers.

Interestingly, the authors found that physicians tend to overestimate time spent with the EHR. As one example, physicians self-reported spending a median of 30 minutes per patient in the EHR. The actual number was just 16 minutes.

Clinicians similarly overestimated time spent on the EHR after hours (defined as 6 pm to 6 am and on weekends). Most respondents thought they spent about 8 hours per month on the EHR after work, whereas log data found the actual media was less than 2.5 hours.

What can individual physicians take from this research about EHRs and burnout?

First, it’s important to emphasize that physician burnout is a structural problem requiring institutions to respond. The Canadian hospital that housed the physicians in this study has since created a multipronged approach toward improving physicians’ experience with the EHR. This includes direct feedback channels, education around EHR updates, and implementing speech recognition technology. Having a strong baseline measure of physician burnout among their employees allows the organization to continue measuring the impact of these initiatives.

But of course, different hospitals may be slower to launch an institutional response. In the meantime, what actionable strategies might be effective for individual physicians who want to lower their risk of burnout?

The message from this study is clear: higher satisfaction and lower frustration with the EHR correlate with a lower risk of burnout. As a physician, that means it’s worth your time to make your EHR work for you.

While all software has inherent limitations, you’ll be more satisfied with your EHR if you focus on what you can control.

EHR software is typically clunky and unintuitive. But reverting to paper documentation is not a viable alternative. When it comes to reducing your risk of burnout, the research emphasizes how important it is to develop an EHR workflow that works for you.

Make your EHR work for you

If you’re not sure how to make your EHR work for you, consider these short articles as a starting point: